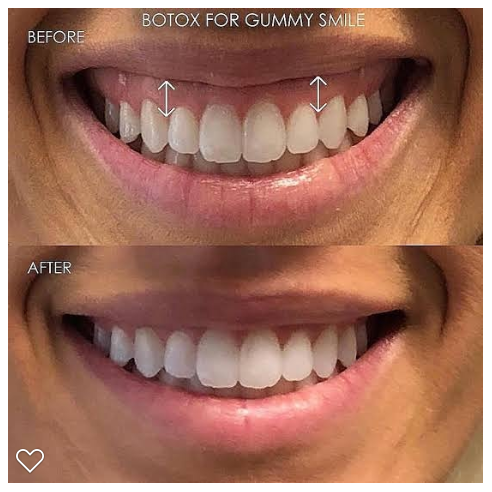 “Gummy smile”, also known as “excessive gingival display” occurs when the upper gums appear beneath the upper lip, especially when smiling. A gummy smile is primarily an aesthetic concern and can lead to the feeling that one’s smile is less attractive than it could be.

A gummy smile is largely a matter of the perception of proportion: the upper teeth, the upper gums, the upper lip, and the position of the upper jaw all contribute to the appearance of a gummy smile when one or more of these is not  proportioned to the others. Roughly speaking, a smile is termed “gummy” when it shows more than about four millimetres of gum.

The perception of the placement of the gum line can be affected by: the height and shape of the upper teeth; the amount of gum growth over the teeth; the degree of movement of the lips, especially when smiling; and the size and angle of the jaw in relation to the face as a whole.

The excessive gingival display can result from one or more of several causes: the manner in which the adult teeth have grown in the mouth, the formation and mobility of the upper lip, or even the effects of certain medications.

Growth of adult teeth and gums

As the adult teeth emerge into the mouth, the gums accompany them. However, if the gum growth covers more than the usual front area of the teeth—a condition called “altered passive eruption”—the result might be a gummy smile.

Another condition, known as “dentoalveolar extrusion” occurs when the teeth, especially the front teeth, have grown in too much, or “over erupted”. Along with this long tooth growth, the gums might also have grown too far.

Formation and mobility of the upper lips

Smiles are more likely to appear gummy when the upper lip is on the shorter side, revealing more tooth and gum when drawn tighter in a smile. Additionally, some people naturally have more mobile lips, drawing open more in a smile.

Effects of some medications

Some medications can cause gums to grow too much around the teeth, a condition called “gingival hyperplasia”. For some people, anti-convulsant drugs (taken to prevent seizures), immunosuppressant drugs (often taken to control auto-immune disorders), and drugs taken to control hypertension (high blood pressure) may cause gums to overgrow. Aside from the possibility that gingival hyperplasia can lead to a gummy smile, gum over-growth can also lead to periodontal disease, which should be treated regardless of whether a gummy smile is an issue.

Corresponding to the variety of causes of gummy smiles, dentistry provides a number of treatment options. Some are more invasive and expensive than others, and not all are permanent solutions.

“Crown lengthening” is a term that describes the effects of a couple of activities. The result is that the tooth’s gum appears longer. Crown lengthening can either remove excessive gum tissue to expose more of the crown of the tooth, or sculpt the gum line to raise it higher up on the tooth.

The related process of gingivoplasty involves reshaping of gums. Beyond treating a gummy smile, crown lengthening can also improve other things, such as preventing cavities or improving a person’s ability to chew foods.

Crown lengthening involves a periodontist or oral surgeon giving a local anesthetic to the patient, then using a scalpel or laser to trim or reshape the gums, revealing more of the tooth. Crown lengthening can be done to a single tooth, or to several teeth, and may be performed over more than one session. Patients find that after crown lengthening surgery their gums are likely to bleed and feel sore for about a week.

In contrast to crown lengthening, where the work is done to the gums, lip repositioning surgery changes the position of the lips relative to the teeth.

To achieve lip repositioning, the patient receives a general anesthetic. Over 45 minutes to an hour, a periodontist makes two incisions on the underside of the upper lip and removes a section of connective tissue. The incisions are then stitched closed.

Patients have usually prescribed antibiotics and pain medication, and require about a week for recovery.

While crown lengthening and lip repositioning surgeries work on the soft tissue of the gums and lip, orthognathic surgery works on the bone structure of the upper jaw, aiming to balance the relative positions of the upper and lower jaws.

Orthognathic surgery entails the efforts of both an orthodontist and a maxillofacial surgeon as well as possibly a periodontist. The process is more involved than crown lengthening or lip repositioning, both in preparation and in the surgery itself. Even before jaw surgery, patients will wear braces or other orthodontic devices to ensure good alignment of teeth and jaw.

The surgery itself involves a general anesthetic, during which a surgeon will balance the length of the maxilla and mandible (upper and lower jaws). One or both jaws might be involved. The bone pieces will be refastened with small screws and plates.

Postoperative time in a hospital of two to four days is usual, and healing typically takes three or four months, followed by checkup appointments.

These are dental devices can help pull the teeth into a position that may reduce a gummy smile, usually involving small screws implanted into the upper jaw bone. The work is usually done under local anesthetic by an oral or maxillofacial surgeon. The TADs stay in place while they exert corrective influence on tooth positioning.

Botox injections paralyze the elevator muscles in lips, allowing the lip to descend over the gum. Botox treatment is less expensive and less intrusive than surgery, but not permanent; injections will need to be repeated every three to four months.

Like Botox, hyaluronic acid is a non-surgical injection treatment for gummy smiles (among other things). Unlike Botox, which essentially relaxes the lip muscles, injections of hyaluronic acid are fillers that change the shape of the lip, and also restrict the movement of muscle fibers in the lip.

Hyaluronic acid injections last for up to eight months, and it’s important to realize that filler injections come with medical risks beyond the scope of this blog post. As with all these treatments for a gummy smile, it’s imperative to get the expert advice of medical and dental practitioners.

As you can see, treatment of a gummy smile can follow a number of paths, some expensive and medically involved, some less so. Your dentist is your best source for initial investigation into approaches for this work.