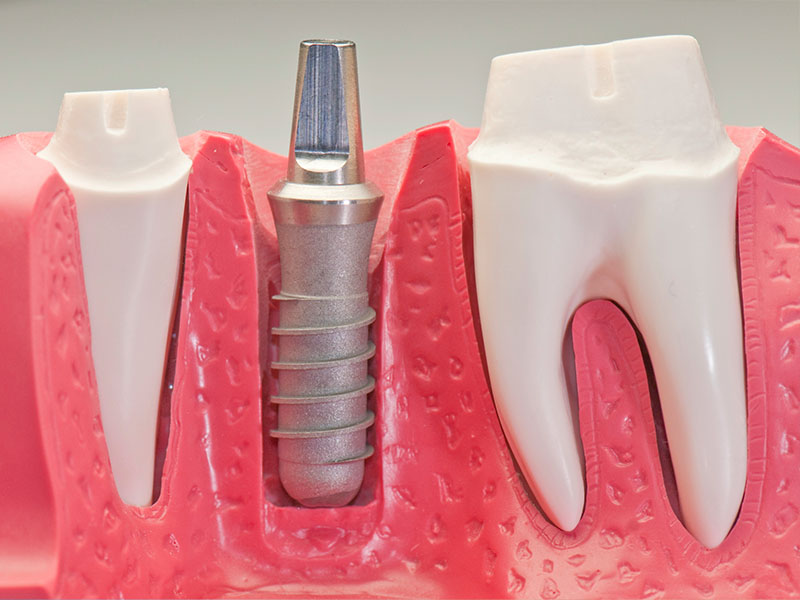 While we all hope for better luck, sometimes a tooth is significantly damaged and cannot be treated with a simple filling. The damage could result from blunt force trauma, tooth decay, or other cause. Regardless of the origin of the damage, the dental goal is to return the affected area of the mouth to full function, with a natural and attractive appearance.

What are the Options?

In cases of significant damage, the nature of the damage to some degree will dictate the treatment used. Generally, the choice of treatment is between an endodontic treatment followed by placing a crown on the tooth, or replacing the tooth with a tooth implant. Both options have their strengths and weaknesses, as described below.

When the treatment is an endo treated tooth plus crown, the process consists of several steps. First, the damaged areas of the tooth are removed and the remaining tooth is prepared to act as the seat for a crown. That process is often called a “root canal”. The process of a root canal is described here.

After the root canal is completed, the tooth is measured and fitted with a crown, which is a porcelain cap that looks just like the top part of the original tooth. The dentist sizes and adjusts the crown to ensure that the “bite” that the patient employs when they close their jaw matches the fit of the original natural tooth.

The usual alternative to a root canal and crown is a dental implant. Dental implants are essentially a new artificial tooth that reaches from the root to the top of the tooth. Implants consist of a threaded metal implant post that is screwed into the jaw bone that originally held the natural tooth, an abutment at the transition to the gum line, and a prosthesis at the top (very much like the crown on the top of a root canal).

The reasons why a crown placed on a tooth that has had a root canal is preferable to a dental implant are several:

First, a crown requires less time, dental work, and hardware to install than an implant. Depending on the work that needs to be done, an implant can take up to a year from the decision to proceed with the work to the final product settled comfortably in the mouth. A bone graft might be needed before the jaw is ready to receive an implant, and that work in itself might take half a year to heal solidly. The overall time to fully complete an implant is quite variable from instance to instance.

Third, a tooth with a crown is still a natural tooth from the gumline down to the root. A natural tooth in a healthy natural context of bone, gums,and ligaments has intrinsic advantages over an implant; it rests in a dynamic and sensitive surrounding. It will be able to make small adaptations to alignment, it will be able (if the root is living) to convey temperature and pain indications to its owner, and it will give pressure and biting information that allows its owner to accurately gauge appropriate chewing.

Finally, a tooth with a crown will usually have a more natural appearance along the gumline than an implant has. Generally, crowns are more aesthetically pleasing than implants because they better reproduce the original gum’s surrounding geography. In the case of implants, a process called “gum contouring” attempts to address the shortcomings of dental implants where the gum does not match the natural gum contour. This is done by fitting a transitional implant crown and conducting repeated “shaping” efforts before eventually fitting the final implant crown.

While dental implants have traditionally been more expensive than root canals and crowns, the difference in price is narrowing over time. Also, implants tend to be a longer-lasting solution. Over the duration of a patient’s life, the overall outlay for a dental implant might be less than a root canal plus crown, especially should the crown need additional work.

If the site of the work is relatively sound, and the existing tooth has a viable future, then endodontic work and a crown are preferable. If the existing tooth will not be able to support a crown, then a dental implant might be the preferred option. Both cases will require that the underlying bone is adequate for the work.

If a person is in generally poor health, the invasive nature of installing a dental implant might be problematic; in such cases, endodontic work capped with a crown might be preferable.

As can be seen, the considerations are complex and require expert analysis. Which option is best depends on a number of complex considerations. Sherway Gardens Dental Centre is well equipped to guide your decision making.